Ambition can be a crippling thing. Coach Carter (Thomas Carter, 2005) is a film about a group of young people who don't have any. Their lives resolve around basketball but they generally don't have any aspirations to greatness. Career, fame, glory - all these things mean nothing to them. They do care about other things, though: self-esteem, popularity, image, the ability to convince others that they're macho. The new, no-nonsense basketball coach, Ken Carter (Samuel L. Jackson), instils discipline in the team, aspiring them to make themselves into better men. The way he does this is through requiring academic success alongside sporting talent. What kind of ambition does Coach Carter advocate? And is it really the kind we should aspire to? 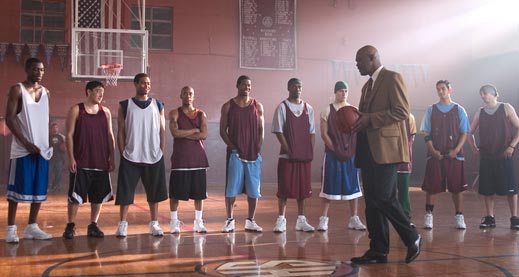 By the end of the film most of the team have improved their schoolwork and several win sports scholarships to university. There's a sense of achievement in what Carter's managed to do. I don't doubt the message that a university education is better than a life in gangs and prison, the radical contrasts the film offers us. But there's an celebration of ambition behind that stark choice that effectively makes a god out of self-betterment. Towards the end of the film one of the students, Kenyon, tells his girlfriend that he's got into university. He's made plans for the two of them and their baby to make a new life for themselves there. She reveals that there is no baby, that she's had an abortion. Others may read this scene differently, but to me it seemed like the magnitude of this news was undercut by the fact that he'd secured a college place. As if the abortion didn't matter. Whatever your views on the rights and wrongs of abortion I think we can all agree that it's a big deal for the people affected. The ideology behind the scene marginalises everything else except what could give you a better job. It says, "Improve yourself! Get to college! That's all the counts".

You can picture society like a ladder. Those people that we esteem the most are at the top - celebrities, the young, the talented. The people we ignore are at the bottom - the elderly and the disabled, for instance. Most people spend their lives trying to get one rung higher, even at the expense of others. Coach Carter effectively says that this is worthwhile, a good way to live your life. It's not the only way of seeing things. 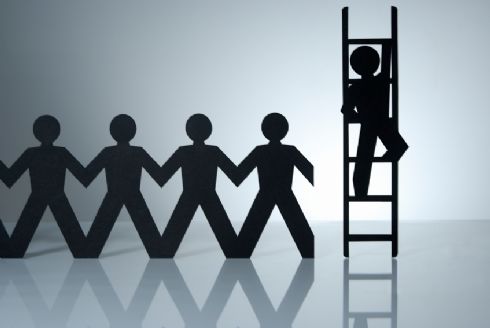 Jesus shows us a completely different way of seeing life. Instead of a 'race to the top' Jesus sees life as a 'race to the bottom'. Jesus paints a future where "those who are last will be first and those who are first will be last" (Matthew 20:16, my translation). He says that real happiness doesn't belong to the rich, the famous and the self-secure but to the spiritually bankrupt, the humble, the justice-seekers and the peace-bringers, the persecuted, the pure and the grieving (Matthew 5:3-10). It's a privileging of the overlooked and the ignored that challenges the way in which we judge and categorise those around us.

Jesus reflected this in His own life. As God, Jesus rightfully had authority over everything. He was top dog (Philippians 2:6). Yet Jesus' whole life on earth was a giving-up of that place of honour (Philippians 2:6-11). He still carried God's authority and deserved to be worshipped 24/7. But people had to give it to Him, and not everyone did. It seemed like, with Jesus, you either loved Him or you hated Him. His ministry went between giddy exaltation and scornful rejection. Sometimes this came from the same people. The most dramatic example of this is in John 6, where a crowd go from wondering at Jesus (v12) after He miraculously feeds them to walking away from Him with complaints about His teaching (v41-42, 60). Yet Jesus never wavered from His mission.

At times, Jesus had to run away because the people wanted to turn Him into a human king (John 6:15). At times, He had to run away to stop them from killing Him (Luke 4:28-30). The temptation to take the human promotion of kingship must have been huge. But His identity in His Father kept Him fixed on the task at hand, which was much less prestigious and yet much more important. Alongside those who wanted to push Jesus into human leadership were those who challenged Him. The Pharisees challenged His authority constantly (e.g. Matthew 21:23). He was accused of siding with the devil (Matthew 12:24). He was betrayed. At His trial He faced a barrage of untrue accusations (Mark 14:56). Even on the cross He had scorn poured on His authority: "He saved other people, but He can't save Himself" (Mark 15:31). Jesus consistently turned down those who offered Him status and prestige when it wasn't in His Father's plan for Him. At the same time, He faced constant accusations and insults. I find it remarkable that, in the face of all that questioning of who He was and what He was doing, Jesus held true. He never sought a higher position but humbly persisted in what God had called Him to.

Think about that image of the ladder again. Jesus shows us that true satisfaction is found in climbing down it. Jesus Himself went right to the bottom rung. Through His death He placed Himself below all people. His example and the life He calls us to offer something so much better (and harder!) than either of the forms of ambition I described in the first paragraph. It's neither the ambition to seek a more wealthy, more successful, more prestigious life nor that of trying to prove yourself through how your friends see you. Jesus had a totally different notion of what's worthwhile (Matthew 20:22). Want to be great? Then serve. We need to master Jesus' lifestyle of one-down-manship. Not finding any need to have ambition because of who we are in Him.

The way God sees us makes any earthly ambition completely unnecessary.
Posted by Matt at 23:21