The Banquet / A Party Worth Going To 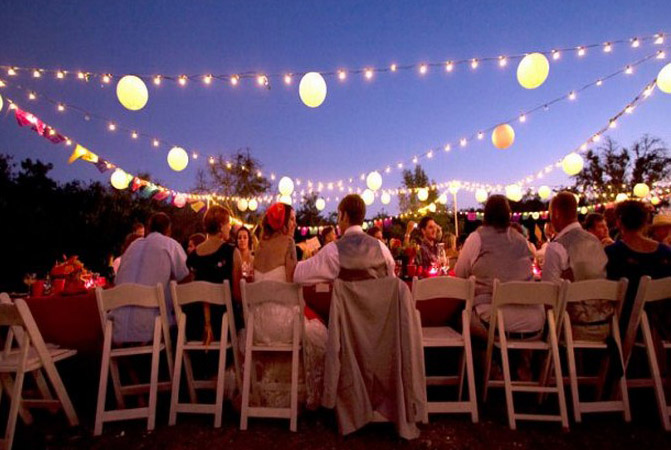 In my last post I explored the central place that community has in Jesus's imagery of eternity, with the picture of a banquet being a repeated theme. The main place this banquet imagery occurs is in Luke 14:15-24. We saw that God is pictured as a man who sends out invites to a dinner party. However, "all the guests made excuses" (v18). One guy's bought a new field, one guy's bought some new oxen and another guy's got married. They all claim that these new distractions prevent them from coming to the party, despite the RSVP list being sent out well in advance (v16). The excuses aren't outlandish - something new coming into each of the guests' lives merited an investment of time. But, considering the importance of the occasion and the advance notice they were given they sound pretty pathetic. It's like saying you can't come to a wedding because you've just bought a new Xbox. The point is this: the guests would've come if they'd thought that the party was worth the effort.

There are probably countless reasons for being wary about Jesus's presentation of eternity but I just want to explore two. This matters because how dedicated we are to God's kingdom in the present is determined, in part, by how convinced we are that the eternal life He offers us is actually worth accepting. So, what are these two stumbling blocks to seeing heaven as the perfect party?

Firstly, there's the concept of unlimited friendship. As I mentioned in the previous post, we all know what it's like to have friendships fade or die. It's because we only have a certain ammount of space for friendships, both in the ammount of time that we have to spend with people and in our emotional capacity to know people properly. Intimacy requires exclusion. People on facebook with 3,000 'friends' obviously don't have 3,000 friends. Nobody has the capacity for it. With the disclaimer that this is speculative (i.e. just my gut reaction), I think that we won't have this limitation in eternity. A parallel might be found in what Jesus has to say about marriage, a relationship which is obviously exclusive in this life but won't be in the future. Jesus says, "When people rise from the dead, they will not marry, nor will they be given to someone to marry. They will be like the angels of heaven" (Mark 12:25). In other words, emotionally content in God. Just as the angels don't need exclusive companions because of the nature of heaven, neither will we. I strongly suspect that the community of heaven will be such that we'll be capable of sustaining a limitless network of friends without ever feeling like we're apart from anyone.

Secondly, there's the people who aren't there. Every Christian knows people, some of them very dear, who don't know God. Unless you subscribe to a universalism that contradicts what Jesus of Nazareth actually taught throughout His life then heaven isn't the only future, eternal reality. Can it really be possible to enjoy paradise when people you love aren't there? A couple of points might be helpful here. Dispensing with the notion that hell is a torture chamber where God maliciously takes His revenge through suffering on non-Christians, an idea which is neither necessary nor Biblical, is a starting point.

Another parallel that might be helpful is Isaiah 65-66, which serves as the key supporting influence on the image of heaven in Revelation 21-22. Isaiah 65:17-19 gives several key images that Revelation repeats: a new heavens and a new earth, a renewed Jerusalem, God with His people, a promise that sadness and crying will end. Isaiah 65:17 says that God's people "will not remember the past or think about those things". And in 66:22-24, where the imagery of a new heavens and a new earth picks up again, there's a new picture of a pile of bodies. These are the corpses of the nations that stood in opposition to God and which God has judged. 66:24 says that "everyone will hate to see those bodies". There's an implication there that God's people can see those who've been judged if they want to...but that nobody will. That's a sobering message, but one which doesn't, I think, contradict the goodness of eternity for God's people. If we really believe that living in rebellion to God is akin to spiritual death then we don't want the contaminating influence of sin to enter God's kingdom, even if that means that people we love (and which God loves) are excluded. Salvation has to be more than an optional extra. There's doubtless more to be said, and more to be prayed over, here but I hope that this image from Isaiah provides a window through which to view the problem: the loss in separation from loved ones may be great but doesn't spoil a future in which all the pain of the past will be eclipsed by an unsurpassed present.

This may be tough stuff. We may not have all the answers. But our response is important. We've been issued with an invitation to an eternal banquet. We can choose to make excuses, which might take the form of intellectual objections to what heaven's like. Or we can send back an eager 'yes!' and, together with our questions and worries, wait for the news that dinner is served.

Let's be clear of one thing. The party is utterly worth going to.
Posted by Matt at 12:31