The following is a short story that I originally wrote in February 2011, based on Zechariah 13:6. I share it here in part because I'm interested in introducing stories onto the blog but (by in large) because I've been too busy to devote too much time to blogging. Never fear, more fresh content will appear shortly. In the meantime, here's a story. 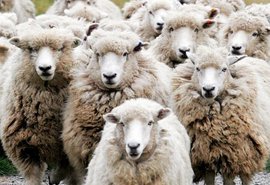 The shepherd gasped, and reached to feel the trickle of blood flowing gently from the wound in his side with his fingers. Time seemed to falter and blur as though unsure of itself. Stronger than anything he felt the hardness of the ground beneath him and the harsh, irrepressible reality of his lifeforce being emptied from him.

His flock had gone, running in the face of danger. They must be far away from here by now, he thought. Perhaps he should have expected them to leave. They were sheep after all and, though it didn't characterise his flock in his eyes, wandering was what they had a tendency to do. Yet the pain he felt now would be easier to bear and the loneliness less intense with them by his side. They were family to him, not just sheep to control or keep in line. He knew each one intimately from those nights in the field, the exact sounds they made and the especial tendencies they had that made them unique. Now they were gone. He felt that.

He felt lonely despite not being alone. In fact, he was surrounded. He raised his head slowly to meet the gaze of a proud ewe. It was standing emphatically at the head of a small herd of older sheep that formed a semi-circle around the bleeding shepherd. This particular ewe was striking. It stood unflinching as a cool breeze ruffled its fleece. Two horns curled menacingly around the top of its head, a sign that it could look after itself. Its large, yellow eyes were fixed relentlessly on the shepherd, emitting an utter hatred. All the sheep wore this merciless expression of pitiless destruction worn thickly over a satisfied glee.

The shepherd sighed again, not out of physical pain this time, but inwardly, and closed his eyes. These sheep too were not unfamiliar to him. They had once, long ago, been his flock, his family, his pride and adoration. He allowed himself to think back to a bright spring day some years ago when the dew had clung fiercely to the grass and the air was fresh enough to linger in his present memory. He had heard a low baaing sound that could mean only one thing and his heart had quickened a little. Rushing determinedly through the wet grass he'd reached a female sheep that was keeled over on her side, bleating. Quietening her, he waited with a dizzy anticipation. And then it had come in a flurry of beauty and he was holding a wet, hairless, freshly-born creature that was looking blindly up at the bright spring sun. He was holding in his hands a being of immense potential and, even if the shepherd was the only one who saw it, glory. This was his sheep, not to own but to care for and to watch over.

Now those eyes that had once blinked innocently up at the morning sun were narrowed with that ceaseless gaze of hatred. It was the same sheep, well learned now in seeking out its own pastures without the help of that now barely-remembered staff and calling voice. The sheep the shepherd had loved and cared for had turned against him. The shepherd let his eyelids open, gave another sigh - his last - and fixed his gaze finally and resolutely on the sheep that had killed their shepherd.
Posted by Matt at 18:30