The Power of the Light 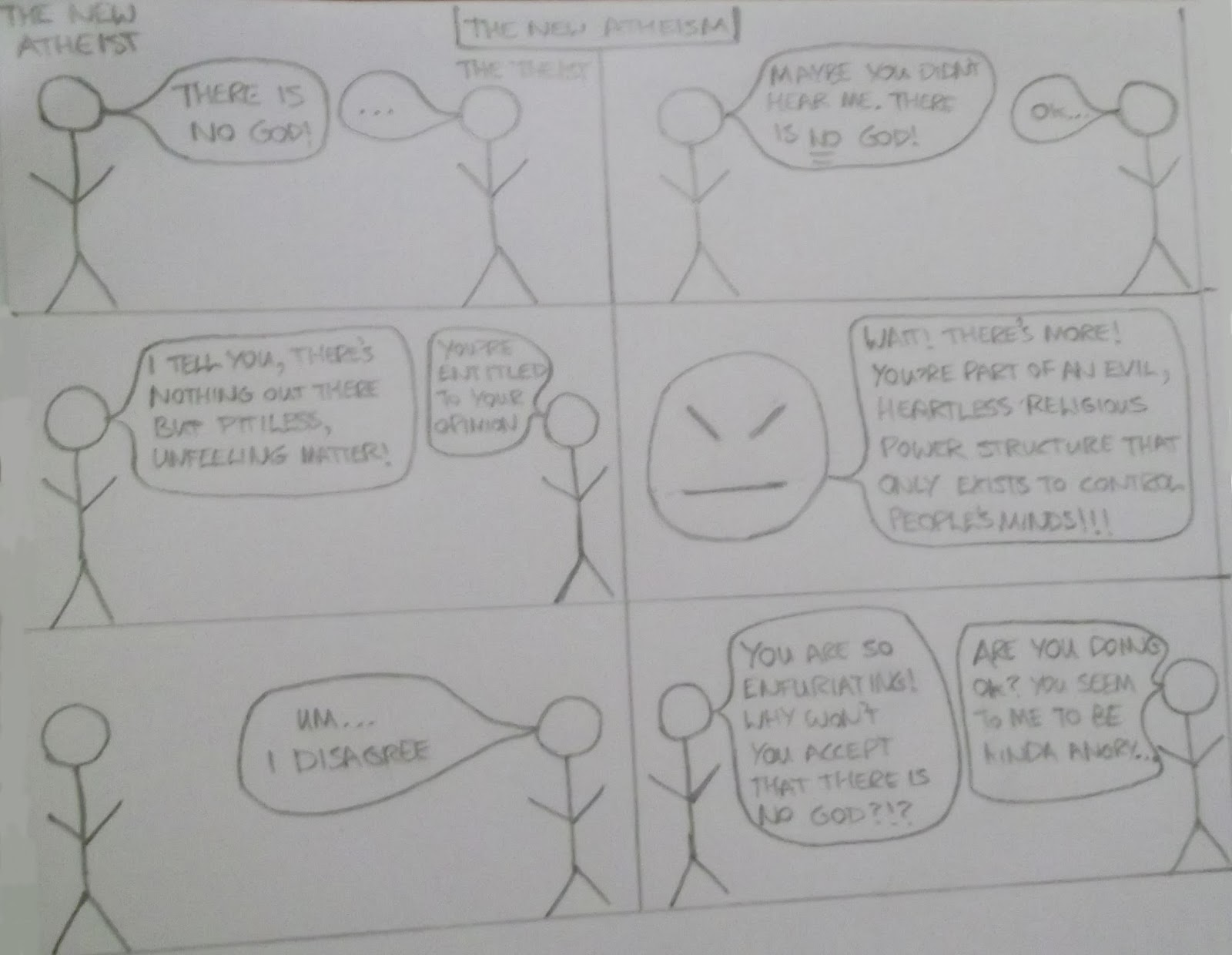 My cartoon, 'The New Atheism', with apologies for the poor quality (I'll scan a proper version in due course)

A couple of days ago a friend of mine provided a link to a wonderful article in The Scotsman by David Robertson. It was a great encouragement to see Robertson so positively and lucidly providing a faith-filled perspective on Christmas and on faith in Scotland in general, especially in a secular publication. As so often, however, I couldn't resist scrolling down to the comments section beneath the article. Now comments sections can be wonderful things, providing a platform to a much wider spectrum of opinions and viewpoints than those that find their way into the mainstream press. Comments can be enlightening or drive you crazy, depending on what they're saying. This particular article featured a comment by a poster named 'voice of reason'. You can read the comment in full for yourself, but essentially 'voice of reason' was proclaiming that Robertson's article constituted "barking mad religious nonsense", "inaccurate superstitious drivel" and "ravings". Whether of not 'voice of reason' would align him/herself with the new atheism (Dawkins, Hitchens and co.) the sort of language used certainly seems similar. It included a belief that we have progressed from theism as a society ("Thankfully more and more people are waking up to the big delusion of religion") and a disdain for organised religion (Christianity's "regime to impose itself on people").

I'll be honest. The comment got me really riled up. I'm a thinker and also take a certain measure of enjoyment from the intellectual jostling involved in arguing over the big issues of life. I like to think of myself as a proponent of logical theism. And the comment made me angry because it implied that my very real faith in Jesus was delusional. Now this wasn't the first time that I'd encountered the ideas of fundamentalist atheism. Nor was I unaware that the comment was probably generating precisely the sort of response that it was intended to engender (we're all familiar with the concept of a troll). Nevertheless, I responded by pacing up and down, coming up with deft counterarguments and generally working myself into a huff.

For example, it enraged me that someone calling themselves 'voice of reason' could apparently be so unaware of the irony of their statements: accusing theists of small-mindedness in precluding atheism from the realms of logic whilst simultaneously doing the same thing to theists. I found myself confronting the opinions with alternative lines of argument. Then it struck me that all this posturing to atheism is entirely unnecessary.

Consider the bizarre nature of militant atheism (the kind of atheism that actively seems to impose unbelief on others). I've previously written on the reasons why it makes sense for Christians to share their faith: firstly, because it's true and, secondly, because God provides the most satisfying life on offer. By contrast, it makes very little sense for atheists to share their lack of faith, precisely because it's the sharing of absence rather than substance. The atheist can suggest that a life lived without God is a happier one than a life lived with God but they cannot actively transform a person's life since they categorically deny that supernatural transformation is possible. Indeed, many atheists seem to have a tough time in convincing anyone that they are living a contented life. Often they seem to be more consumed by anger than peace. If someone is convinced that there really is no God then surely it's enough to vehemently hold that opinion (after all, I'm not suggesting that apathy is a better alternative). If the issue of God will never be conclusively settled in one direction or the other and if atheists aren't obviously happier than non-atheists then trying to rob other people of faith certainly seems illogical (as David Mitchell has persuasively outlined).

Funnily enough, I have a lot of respect for atheists. It seems to me to be the most logical worldview available after Christianity. I don't mean that statement as cocky oneupmanship; it's my seriously-considered viewpoint that has been generated by substantial thought. I do genuinely appreciate both the attraction of a universe without a deity and many of the reasons why our existence appears to some to be Godless. I don't want to castigate atheists. In fact, I relate to atheism on many levels. But militant atheism seems to be as upsetting as it is illogical. It is sad to me that some people appear to take such a level of personal satisfaction in arguing that there is no God. I have no desire to look down my nose at atheists and pity their unbelief. But neither do I have any desire to share in the aggressive evangelistic rhetoric of the militant atheists.

When faced with the bravado that some militant atheists display in their statements about God many theists feel threatened. The temptation is either to worry that faith might be delusional after all or else to fight back with similar ferocity. It might be more sensible to let our faith do most of the talking. One of the highlights (doh!) of Robertson's article was the analogy of light, which is a familiar part of the imagery of advent. The thing about light is that it doesn't have to fight the darkness. It repels it simply by being light. "The Light shines in the darkness, and the darkness has not overpowered it" (John 1:5). I'm not denying that spiritual warfare is a reality (Ephesians 6:10-13), just that Christians don't need a militant attitude to debating faith. A siege mentality is entirely unnecessary because atheism itself can pose no threat to anyone. Simple, yet reasonable, faith is the light that withstands and overpowers all darkness.
Posted by Matt at 15:51